I feel like I'm about to have a "Dark Helmet moment." Explaining how I came into this beer is going to sound a bit like "I am your father's brother's nephew's cousin's former roommate." A coworker and friend, who also likes craft beer, is also a graphic designer. He of course has other friends who like craft beer and a few who brew it. One of those friends has started Wander Brewery and needed my coworker to design a can for him. As part of the payment, my friend received some of said beers he helped to package, and shared a can with me to celebrate his success.

That turned out much longer than Dark Helmet. Maybe one of the powers of the Schwartz is brevity.  In any case, this pint can labels as a Double IPA and hails from Bellingham, WA. Can I expect one of the West Coast hop bombs or one of the trendy new cloudy East Coast concoctions? One way to find out.  Let's pour! 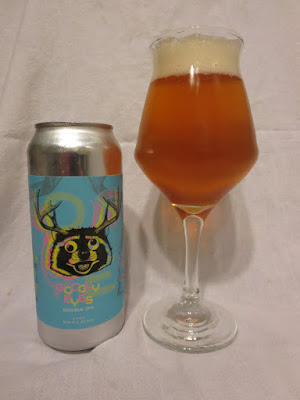 Aroma 9/12
First to the nose is pineapple, but grapefruit and pine resin are also abundant. I'm going to give this another sniff after it's had a chance to warm up a bit... OK, some caramel malts are finally starting to poke through, which is to be expected. Grapefruit is now the primary aroma. Smells like a DIPA, but isn't particularly earth shattering.

Appearance 3/3
Appropriate for this time of year, the beer pours a bright, pumpkin-y shade of orange into the glass with copper glints abundant. The beer is surprisingly clear - not a trace of cloudiness here to hint at some sort of East Coast styling (not even with a swirl of the can to stir up the dregs). Pillars of bubbles stream to the surface like a champagne, giving at least a consistent half finger of foam even after the beer has sat temporarily. That ivory-colored head starts out looking thick like whipped heavy cream, but eventually leaves big gaps where large bubbles have escaped. Nice lacing too. 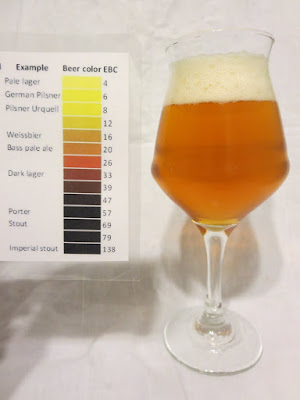 Flavor 19/20
After smelling those caramel malts, I expected a sweeter introduction to Googly Eyes. Instead, it was rather neutral or cream-like, which does allow one to pay attention to the body and mouthfeel rather quickly. A quick touch of light caramel, almost honey-like, sweetness and then the hop profile kicks into full gear and it's off to the races. My notes list the following flavors and I almost couldn't jot them down fast enough: weed, earth, spiciness, pepper, woody, resin. This is definitely not the citrus cocktail that most folks fawn after, but that certainly doesn't make it any less complex nor any less of a feat to bring out all those flavors. How many hop varieties are in this anyway? The longer you hold it in the mouth, the more you will discover. The finish is more of the spice and pepper, plus a tiny bit of the 8.5% ABV. Well, if you've held it in your mouth.  Quicker swigs allow that crazy hop profile to blend a little more with less-than-intense sweetness. Aftertaste is that grapefruit bitter and tingle on the tongue, plus that undeniable earthiness.

Mouthfeel 5/5
Big and solid, without being syrupy or heavy.  Perfect level of carbonation that gets an assist from the peppery hops that are prickly on the tongue. Alcohol warmth is basically hidden. I'm pretty sure I could drink this faster than I should. 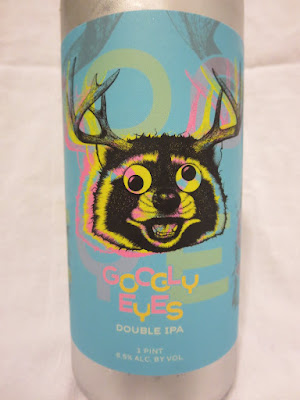 Overall Impression  9/10
That hop profile is impressive!  Lots going on there. Appearance is appropriate, mouthfeel is great, drinkability is dangerously high. The aroma seemed to be the beer largest shortcoming. Of course, I am just recovering from a cold, but as I can breathe through both nostrils, I hope this isn't too large of a handicap. I would definitely buy a 4-pack of this,or feel comfortable giving it to a hop head friend.

Total  45/50
Definite "bonus points" for hop complexity. I said it before, this bitter, earthy mix isn't everybody's cup of tea, but that shouldn't detract from the variety of flavors presented.. Hop heads will love it anyway. The sweetness is a bit "watered down" for as big a style as a DIPA should be, then again a larger malt sweetness may have hidden some of the hop complexity. Though with the aggressive flavors in these hops, I find that unlikely. That and the basic aroma are all that are holding this beer back in any fashion. In my mind, the complexity is the significantly more difficult characteristic to produce
Written by Sud Savant at 7:29 PM 0 comments

Keep tabs on the taps!

Sites that have Featured Sud Savant

The smartest advertisers EVER!